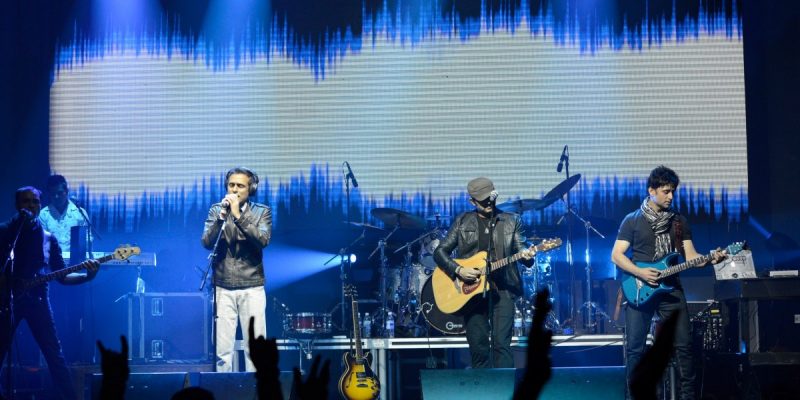 How the Pakistani band championed rock music in the subcontinent

As Pakistan reeled from President Zia-ul Haq’s oppressive cultural repression in the 1980s, a revolutionary rock music scene was brewing in universities and five-star hotels. The pop rock band Strings, formed in 1988 in Karachi, were a strong pillar of this movement, capturing the imagination of millions not only in Pakistan, but across South Asia.

Thirty-three years later, the group decides to hang up the boots in March.

“Everything must end. Thirty-three years is a long time. It was going to be endless. Right now, Strings is loved by everyone and everything is going well. So it’s a good time to say goodbye,” singer Faisal Kapadia says over the phone.

From the start, Strings – which was started in college by Kapadia, singer-songwriter-guitarist Bilal Maqsood, keyboardist Rafiq Wazir Ali and bassist Kareem Bashir Bhoy – wanted to make original music in their native language. , following in the footsteps of Vital Signs, whose 1987 single “Do Pal Jeevan Ka” became the first example of the use of Urdu in rock music.

Strings’ self-titled debut album, released in 1990, was a journey into soft rock territory with many influences from western synth-pop, glam rock, disco and even rap. This continued in their second album “2” in 1992, which had their first hit “Sar Kiye Yeh Pahar”. However, Strings disbanded that same year, as its members wanted to focus on their studies.

(In the heights of the mountains
At the bottom of the rivers
I looked for you
Come at least once
My friend, don’t steal from me like that
From the peace of my heart)

Seven years later, while Maqsood was doing commercials for a production company, he had the opportunity to compose a song so he roped himself into Kapadia. Maqsood had a melody in mind that impressed Kapadia enough to want to record it. This melody would eventually become one of their best-known hits “Duur”. The song prompted them to make another album, ‘Duur’ (2000). Thus, Strings was reborn in 1999 with only Kapadia and Maqsood.

While Maqsood composed the songs, the lyrics were written by his father, the poet Anwar Maqsood. Keeping in mind the audience of a rock band, he used a language that the younger generation spoke.

Elaborating on the creative process, Maqsood says, “I usually work on the melody first, not the lyrics. I think about what the song says – nostalgia, travel, sadness, etc. abba, which writes several options to choose from. This collaborative process continues until we finalize the song.

Their sound had also evolved out of the Western umbrella now, grounded in a space that had Eastern elements. According to Maqsood, “The oriental touch in the melody of ‘Duur’ gave the whole album direction. This sound was not present on the music scene at the time. It was only later that we realized the novelty of this element.

This sound was immediately identifiable to crowds across the subcontinent. It was also the time when music videos became fashionable and they took advantage of it. In Pakistan as in India, the popularity of Strings has increased thanks to channels like MTV and Channel V.

Musically, another turning point was the composition of the 2003 Cricket World Cup anthem for Pakistan – ‘Hai Koi Hum Jaisa’. The dynamic rhythmic nature of the song was a departure from their laid back sound. “The furrow had a desi swing and we had a lot of fun playing it live. LastThe beats of didn’t translate into good live songs and we realized what was missing,” says Maqsood.

So their next album ‘Dhaani’ (2003) ended up having compelling rhythms and intricate arrangements with deep use of oriental percussion and flute, cementing the musical direction. The band’s sound had also been established by now – marked by dense instrumentation, tight grooves, subtle background guitar fills, heavy production and an emphasis on vocals. Although the genre is rock, this sound has been removed from its Western ties. By tracing their roots, the Pakistani band had found their distinctive sound.

Around this time, the group found they had a cult following in India as a remixed version of their song “Sar Kiye Yeh Pahar” had been doing the rounds in Indian clubs. They were also featured on Channel V’s “Jammin” show with singer Sagarika Mukherjee. “The artists met, wrote, composed, arranged and recorded a song in three days. And it was all filmed! Kapadia recalls.

The resulting “Pal” was one of two Dhaani songs that saw collaborations with Indian artists – the other being vocalist Hariharan. Besides that, Strings has collaborated with folk rock band Euphoria, playback singer Sona Mohapatra and performed with Indian Ocean and Parikrama on several occasions.

While this cross-border camaraderie was acclaimed by fans, it took a hit in 2008 after the Mumbai terrorist attack. Anti-Pakistani sentiments grew in India, and Pakistani artists were barred from performing in the country. It cooled off within a few years and artists were able to perform again, but it was short-lived. Strings gave their last concert in India in 2014 at Rashtrapati Bhavan.

“It’s a pity that the exchange of artists comes across obstacles from time to time,” says Kapadia, who considers India his second home. “But music and art transcend borders. The love the people of India have given us – we can’t thank them enough.

While the main theme of the band’s songs is love, they have ventured into other areas like motivational sports songs as well as travel tunes. Surprisingly, two of their most tender songs, “Titliyaan” and “Urr Jaoon”, deal with the memory of the dead and death itself. The former reflects on loss while the latter, part of their latest album “Thirty” (2019), contemplates the day one dies.

However, their socio-political commentary has always been largely ignored. Their very first album had a song called “Pyasi Zameen”, which reflected the suffering caused by the severe droughts and famines in the Thar region in 1987 and 1988.

The 2006 Israeli-Lebanese conflict prompted them to write anti-war sentiments in the single “Beirut”. After 2008, the political situation in Pakistan was gradually turning into dangerous chaos with the increasing activity of terrorist groups. “The air was very different. Pakistan was also going through a very difficult period. Bomb explosions were happening in every city and people were dying. Even the cricket has stopped. It was then that Bilal wrote ‘Ab Khud Kuch Karna Paray Ga’,” Kapadia recalls. Featuring Atif Aslam, the song urges people to take matters into their own hands and do something to save the country and its people.

From 2013 to 2017, Strings took charge of producing the critically acclaimed TV show Coke Studio Pakistan. Here they have worked with musicians from different musical traditions – stalwarts of classical music such as singer Rahat Fateh Ali Khan, sitarist Ustad Rais Khan as well as ‘Baba-e-Pop’ Abida Parveen and Zoheb Hassan of the superduo Nazia and Zoheb.

Despite numerous accolades and performances around the world, Strings’ legacy is pretty basic – it lies in their unforgettable songs that crowds at their concerts know by heart.

“When you’ve been playing for three decades, you don’t have to do anything more to engage people,” says Kapadia, “Songs are the biggest connection.”

Shaswata Kundu Chaudhuri is a Kolkata-based freelance journalist with an interest in music.