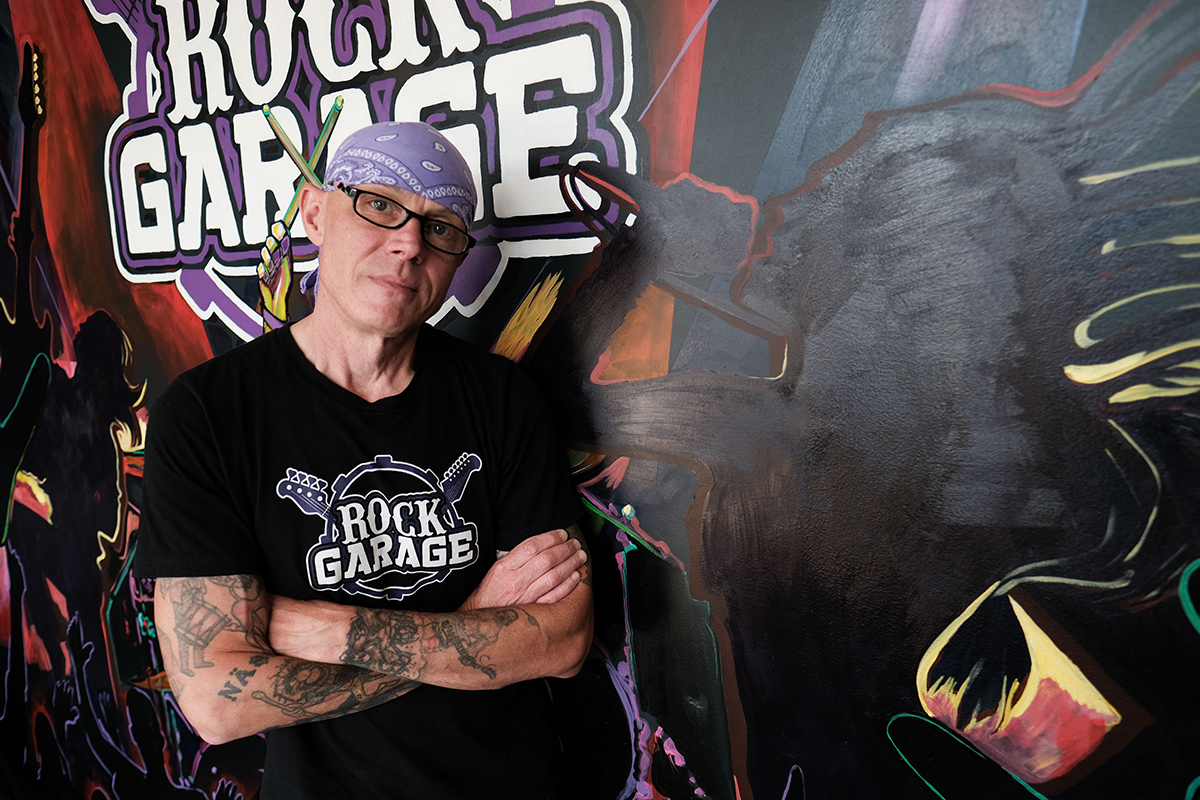 Opening a physical location for a collaboration-based business can seem like a risky move during the peak months of the pandemic. But for Indianapolis-based Rock Garage, it seemed like the only way forward.

In fact, the pandemic itself led to the creation of the company, which offers music lessons as well as a program that places musicians of all ages and backgrounds – from beginners to seasoned guitarists, drummers and singers. – in rock bands.

The founders – three musically inclined couples – were frustrated by the lack of options for jamming and teaching music during the shutdown and then months of restrictions.

So in June 2020 they opened Rock Garage, first in a temporary location, then moved in September to a nondescript office building at 8115 Center Run Road in Castleton.

The founders describe the company as a music school. But it offers more than lessons. Musicians – and aspiring musicians – pay for memberships that put them in a band.

Groups receive guidance from musical directors and can practice, perform and create their own music. They choose a group name and some perform at independent shows outside of Rock Garage. Members range from pre-teens to 80s.

Preston and Rocky Nash, two of the company’s six owners and founders, started a similar program at a music retailer in Indianapolis in 2011. When the pandemic hit, that retailer’s hours changed and it no longer offered of group lessons, which meant that the Nashes were unable to manage their school.

But Preston, who has been teaching music since the 1990s, believed rehearsals and classes could still go ahead safely, with social distancing and sanitizing protocol. So last summer, he and Rocky found a warehouse in Indianapolis to start teaching again.

In the meantime, Preston and his friend Dave Foellinger started an online forum called “Rock Garage” which allowed musicians who had been on the previous program to keep in touch and share ideas.

Eventually they combined the two efforts and decided to open a permanent location in Castleton.

“We didn’t just get together one day and say, ‘Hey, let’s open a school called Rock Garage,'” Preston Nash said. “It evolved based on circumstances, and now we’re at a point where I don’t think any of us expected such rapid growth.”

The six founders — the Nashes, Dave and Kate Foellinger, and Steve and Kimberly Klinger — funded the startup and have since seen membership grow from about 20 groups to 42. (Kimberly Klinger is a sales representative at IBJ Media Co. , which owns IBJ .)

The business has been profitable since its inception and continues to see membership growth.

“All three of us brought different things to the table,” Dave Foellinger said. “I said, ‘Let’s risk it all!’ So, in that sense, it’s really an old-school startup.

Rock Garage is in a long, low-rise office and retail building just south of a Goodyear Auto Service store near East 82nd Street between Interstates 69 and 465. Nothing about the exterior screams rock ‘n’ roll, but a large mural inside the main entrance announces the location as a house of music.

Rooms containing drums, electric and acoustic guitars, as well as recording consoles and full keyboards are spread throughout the 2,800 square foot facility.

Memberships are typically divided into 13-week sessions with several options for lessons and group placement. A basic subscription costs $300 (a little more if a customer pays in installments). The 13-week platinum and double-platinum subscriptions cost $540 and $765, respectively.

Private lessons, at a cost of $30 for half an hour or $55 for an hour, are offered for guitar, bass, drums, vocals, banjo, mandolin and ukulele.

But the magic is not in the lessons themselves. It is in the groups and in the community that has developed among the people who participate in them. This is one of the main reasons why the founders have focused on carefully selecting groups of people who they believe will bring positive chemistry to a group.

“Having a rock music program, on paper, doesn’t really reinvent fire,” Preston said. “But the way we do it, I think, sets us apart from other programs out there. We really try to make it a microcosm of what a live musician really is. There’s something to associate with the chemistry; a group develops its own personality, and this program is like being in a real group.

Foellinger and Nash say the work is bolstered by new members joining at the recommendation of an existing client.

Rock Garage is also adding a full production recording studio that will include a recording console that once belonged to keyboardist Kenny Rogers.

The studio will allow bands to produce recordings of their music and provide the opportunity to teach recording lessons. The owners also plan to rent out the studio to outside groups when not in use.

Preston and Rocky Nash work full time at the company and they have four other full time instructors and group coaches.

Paul Giefing, who sings and is the lead guitarist for Indianapolis-based band Rhino Down, met the Nashes while teaching at the store 2½ years ago. He has since followed them to the Rock Garage.

Giefing, a commercial banker, said the program gave him an avenue for his musical passion and allowed him to be part of a rock community. His son is also a member of Rock Garage.

“It starts with leadership of the place, bringing out the best in people,” he said. “Preston and Rocky know the industry, but they run the program with heart. They have built an environment where when you show up, you want to grow and learn.

Ben Howard sings for the band Doppelganger and plays drums for a band called Plank. Howard, 20, is part of the youth group program, for ages 21 and under. Howard had been on the Nashes’ previous schedule since 2017 and followed them to Rock Garage.

“Everybody knows everybody, and I think that’s what makes it unique,” Howard said. “I’ve seen music programs where you walk in, see your teacher, and practice in a band. Here, it’s family. You get one-on-one time. » •