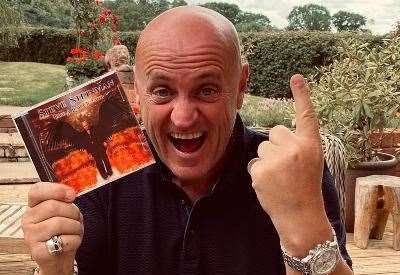 Steve Steinman Rises to Top of iTunes and Amazon Rock Charts with Debut Album, Take A Leap Of Faith

While most people were forced to slow down during lockdown, for showman Steve Steinman, it offered him the chance to branch out.

The result is his debut album, Take A Leap Of Faith, which went straight to number one on the iTunes and Amazon rock charts.

The Newark singer is best known for touring the country with his rock shows, such as Vampires Rock and Anything For Love, but he is now planning a tour of his original material.

“An album is something I’ve never done before – it took me 30 years to do it,” Steve said.

“It never crossed my mind. I was always too busy with my shows, which performed other people’s music. Now I have a number one album – it’s mental.

Steve had just started his Anything For Love UK tour when lockdown hit and the whole live music and theater scene came to an abrupt halt.

Other than the online fan shows – Office Rock Downs – there were no performances, leaving Steve with some free time.

He said: “We had just done the first show of Anything For Love in Halifax and everything just stopped. We had everything ready for the tour, then a concert and that was it.

“But when Jim Steinman (songwriter and producer) died, it made me think that kind of music doesn’t exist anymore. It stopped with Jim Steinman and Meat Loaf, but there’s a need for it – obviously because the album did so well.

Steve said he was amazed at the success of the album, described as classic soft rock. The songs given to him by the writers were arranged by Steve to put his own twist on them.

He is already preparing a second album, which will be released next year. Among the tracks is one written by John Parr for Meat Loaf but never recorded, so Parr gifted it to Steve.

Steve then plans to tour in September next year.

“With shows, you start singing and the audience cheers, which is always exciting, but it’s not your song they’re cheering for, that’s why going on stage with my own songs will be amazing,” a- he declared.

But Steve has no intention of leaving behind Vampires Rock and Anything For Love.

The Anything For Love Tour finally resumes later this year, with a date at Nottingham Motorpoint Arena on December 16, and Vampires Rock is back next year and will include a stop at the Newark Palace Theater on February 18.

“It’s going to be amazing to get back on stage,” Steve said.

“I’m on tour with Anything For Love with Lorraine Crosby but I’m also going to add some Steve Steinman songs because they’ll fit in and it’ll be good promotion.

“Then there will be Vampires Rock. I never plan to stop doing these shows. The album is just one more string to my bow.