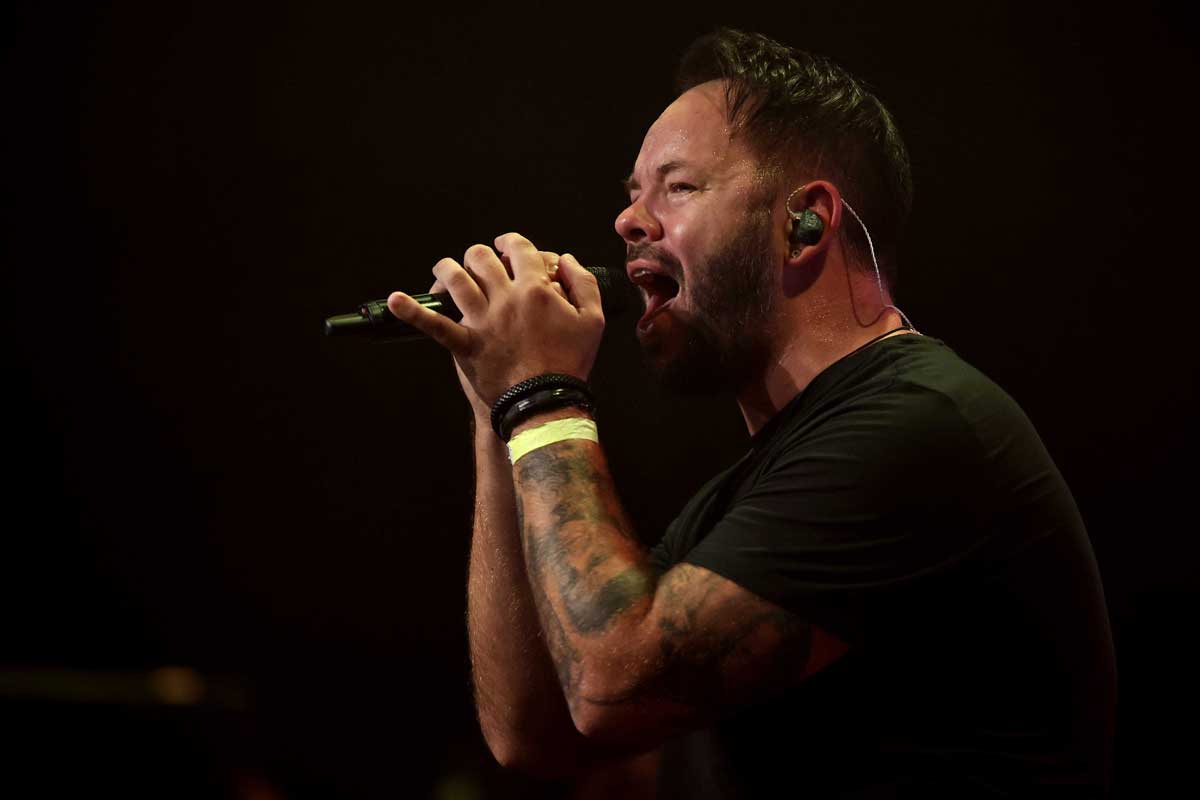 These Damn Crows are currently touring the UK with Monster Truck. On their second date, MetalTalk’s Andy Shaw met vocalist Shane Greenhall about an hour before the band took the stage at the fabulous KK’s Steel Mill.

These Damn Crows have seen their stock increase in increasing leaps. Their second album, Point Of No Return, entered the UK Album Chart at number 14. They kept their spirits up on the second stage of last year’s Download Pilot, and this year saw them beat Firestorm, Stonedead, Chepstow Castle and, of course, another appearance at Download.

“All of those things had strengths,” says Greenhall. “Firestorm was the first festival, so we didn’t know what to expect, and it turned out amazing. The crowd that went there was so up for it. The upload is obviously the highlight, I guess, of the year, because we’ve been wanting to play this stage for god knows how long. Since we were children. It was something else. It’s been a pretty cool 2022 considering it’s the last year after what has been an absolute shit show.

MetalTalk said These Damn Crows were an inspired choice for Stonedead 2022 because they’re an insanely good live band.

Their set at Stonedead was flawless. It’s hard to believe that these are just two albums in a career that, to date, is full of promise.

The upload was a great impactful sight. Greenhall was in the pit at one point, proving at 1.15pm that it’s never too early to ramp up the madness.

With displays like this, it sure seems like These Damn Crows, with special mention to Florence Black, are at the forefront of New Wave Of Classic Rock. They are the standard bearers.

“It’s amazing to hear,” Shane said. “We don’t see it as if we were the leaders. We’re just gonna do our thing. There are so many amazing bands out there right now, and rock music, in particular, is skyrocketing. You know, there was this kind of underground feeling. But now it is reaching the levels it reached maybe 20 years ago. We’re just happy to be part of it, man. We always give everything and people react.

People seem to be looking for bands now rather than just going to the main band. People do their homework.

“100%,” Shane says. “We did Thunder at Motorpoint, and everyone came in so early to watch us. I think everyone is chomping at the bit for new material, and they want to go see it rather than just hear it on social media. Now they want to go, buy the tickets and see if this band can live up to what they hear. The rock scene has grown. I think the fans are so intrigued now, they want to go out and see live music, and I think that’s why it turned the corner. I think the fans are ready to come out even on a school night and support those bands they’ve connected with.

A new album is on the horizon. Inhale/Exhale is slated for release in February, and the artwork, designed by Alex Tillbrook, is amazing. “We explained the ideas and the concept of the album to him. He just got it, and we were off to the races. We are so happy with it. In this industry, working with these artistic and creative people together, you’re on the same page. So it was really easy to talk to Alex, and we’re buzzing with the new artwork. It’s really special.

The news about the new album is that it sounds quite emotional. It seems like there are a lot of stories in there that the whole band is trying to express.

“I don’t know how to write other than be honest,” Shane says. “Yes, we can manipulate and exaggerate certain stories. But this album literally came from the heart. We’ve all been through so much shit. I mean everyone on the planet, in the past two years. We have lost some truly special people within the Crow family. So, yeah, when it came to recording it, all of those emotions came out, and sometimes you can’t even describe or put into words what it really is. There’s just something in it. It’s in this band’s DNA now and forever.

How do they choose a window to release the album making sure all the strands come together? “It was supposed to come out in October of this year,” Shane explains. “A few things happened. Some things weren’t ready in the product, the vinyl in particular. Obviously we want to set a chart, and in order for it to chart, you need to have certain things in place. So that there was no point having the CD and all the digital stuff ready if the vinyl wasn’t so it was just a case of all those boxes having to be checked before you could say, you know, let’s go .

CrowCast podcasts during lockdown and after lockdown were a big part of what a lot of people listened to. Is it something you want to keep doing?

“100%,” Shane says. “But the first thing about being a band is being a band. So you know, live music is back, albums are back. Maybe we’re thinking about CroweCast when we’re not touring or maybe also on the road. It was such an important part for us and our fans, but also for the rock community. We had talks with Kris Barras and other people in the scene. We couldn’t go to concerts , so that was our gig, involving everyone when we could, and the support was amazing. They’re coming to our shows now. We did a gig in Cardiff, and I just extracted a bit of What’s The Next Line on the acoustic guitar, and everyone sang it back. It was just like, it’s crazy. It’s not even a song, really, but it just kind of stuck out. I think everything the world needed it, and we’re so glad we did it and it will continue, but maybe not the same ch dare. First we have to be a group.

As for Wales’ prospects at the World Cup next month? “They can turn it on and something clicks, but they only play with passion and the underdog stuff. This is what we thrive on. That’s what we love, which is amazing. It would be amazing to be there. Me and Ronnie [Huxford, drummer] go to games regularly. We went to Poland the other day, disappointing result, but we were competing and we didn’t have a full squad. So who knows? I think in these tournaments, everyone is beatable that day.

Filming with Monster Truck is the current plan, with future plans slated for February. “After this tour, we have a few things to do, like videos and release stuff,” Shane says. “Everything is getting ready for February. We’ll be doing a few things on CrowCast with some exclusive stuff there. As far as concerts are concerned, this tour will probably be the last unless something happens, and we are always ready to do something. But yeah, it’s about getting ready for this album.

With 40 minutes left in the show, Shane was off to warm up his vocal cords before the band went wild on Wolverhampton. MetalTalk will be attending another gig later in the tour, but word is things are really picking up speed for the guys from Wales, and we couldn’t be happier for them.